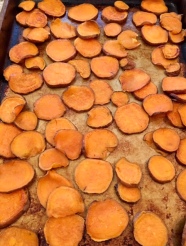 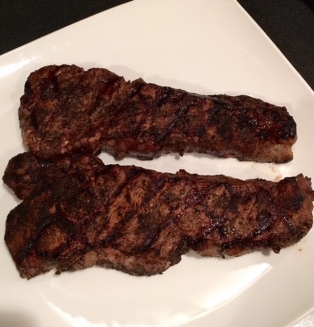 What a difficult challenge- pair two great reds with two great steaks.  Ok, so it wasn’t a true struggle, as these things belong together. The Reds: Duckhorn “Cabernet Sauvignon and Nickle & Nickle Merlot. Both were terrific.  The Cab was a little thinner than your typical California cab, but it was smooth and the tannins were soft, the fruit favors were light and the earthy notes presented forward.  The Merlot was robust, very prominent dark fruit flavors and a heavy mouth feel, but not acidic and the tannins were just the right bit chalky.

The steaks: NY strip with a dry rub of paprika, brown sugar, vanilla bean, salt and pepper. Check out those grill marks!! To top it (not that it needed a sauce after the overnight infusion of vanilla and friends), I made a mango BBQ sauce with more hints of vanilla.  I don’t know why I was on such a fierce vanilla kick, but wow did they come out good.  The bison stayed simple so we could really taste the steak itself. Delish!! It was at this moment, a couple bites into the steaks after overeating on our app spread (I could do a whole separate blog on appetizers, but I digress), that the Merlot came to life. It had met its mate in the flesh – the steaks – and started singing. The sips became more colorful, deeper, danced with the meaty residue of the steak duo in my mouth, and they rode off together into the sunset.

As full as I was, I kept eating the sweet potato chips (in the first baking phase above).  I baked them first with just olive oil. Then I tossed them in brown sugar, vanilla salt, cinnamon and allspice and baked til crisped. Oh man they were good!!